Thank you to Doug Eisenger for the photos 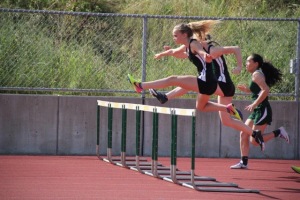 In the Girls 110 Hurdles Boyd places 2nd. The race was won by Kohlbrenner 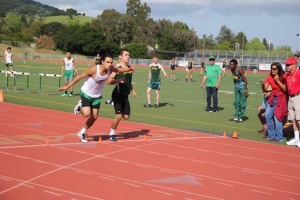 In the Boys 400m race Inua Ramos of Drake and Conrad Raymond of San Marin battle at the end.

The final 2015 MCAL Track & Field Top Performances Lists are in.  Congratulations to all of the athletes who participated.  We hope your season leaves you with great memories and many PR’s.

The 2015 CIF State Track and Field Championships will be held Friday and Saturday, June 5 and 6.  Meet Information, schedules and performance lists can be found at: 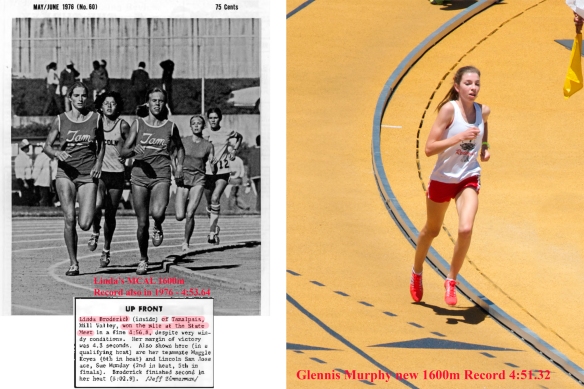 On Saturday May 30, 2015 at the NCS Meet of Champions Glennis Murphy of Redwood set a new MCAL record in the Girls 1600m breaking the record set on the dirt track in 1976 at the Meet of Champions by Linda Broderick of Tam.  Broderick went on to place 1st at the 1976 CIF State Track and Field Championships.

In the 1976 photo Maggie Keyes of Tam is on the left. Keyes placed 3rd at the 1975 CIF State Meet and went on to compete in college. She won the 1980 NCAA Womens 1500m as a senior at Cal Poly. Keyes continued racing after college for Nike’s Athletics West and qualified in the 3000m for the inaugural World  Championships in Athletics. This meet was held at the Olympic Stadium in Helsinki, Finland in 1983.

The following athletes placed in the top 3 at the NCS Meet of Champions to qualify for the 2015 CIF State Track & Field Championships to be held June 5/6 at Buchanan HS, Clovis.

Glennis Murphy of Redwood placed 4th in the Girls 1600m with the time of 4:51.32. Glennis met the qualifying standard for the State Meet.

The top 3 athletes in each event qualify for the CIF State Meet to be held June 5,6 at Buchanan HS in Clovis, CA. The top 6 places medal.

It’s not too late to sign up! Email WeRanMarin@gmail.com to sign up for Ran Marin’s Summer Training Program