Start of the Girls’ Race: Redwood, Branson, MC, JS (October 29, 2015). The race was eventually won by Grace Dailey of Branson.

MCAL cross country teams were back in action this past week with the final dual meets of the season.  See results below: 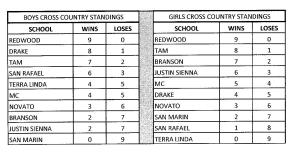 The next meet is the MCAL Finals on Wednesday, November 11 at Indian Valley College in Novato.

John Lawson (Drake) of CAL ran a strong race to finish in 21st place in 23:48 as CAL’s 2nd team scorer. The CAL team placed 7th. John was closely followed by Fred Huxham (Redwood) of Washington. Fred finished in 22nd place in 23:49. The Washington team placed 4th. The race was won by Edward Cheserek of Oregon in 23:06. In the team competition Colorado won the meet with Stanford in 2nd place.

Julia Maxwell (Branson) racing for Stanford ran a well paced race to finish as Stanford’s 3rd runner. Julia was the 5th scorer in the 3 previous races. Julia finished in 19th place in 20:30 to help the Stanford team place 3rd. CAL’s Megan Bordes (Redwood) placed 42nd in 21:00 as part of CAL’s 7th place finish. The race was won by Aisling Cuffe of Stanford in 19:53. In the team competition Colorado won the meet with Oregon placing 2nd.

Stanford’s Pac-12 3rd Place Women’s Team. Julia Maxwell is in the middle of the front row

Qualifying teams and individuals will next race at the NCAA West Regional Meet to be held on Friday Nov. 13 at Seattle, WA.

The Pre Nationals Meet was held at E.P. Tom Sawyer Park on Saturday.  According to the website “The meet is a preview of the upcoming NCAA Cross Country National Championship held in Louisville on Nov. 21, providing a look at a handful of squads hoping to compete for the top-four podium honors … It will also feature a number of individuals hoping to earn All-America honors in 2015.

Stanford’s Julia Maxwell (Branson) placed 79th in 21:01 and was the 5th team scorer to help the Stanford team place 4th at Pre Nationals. Photo below.  SpencerAllen/SportImageWire.com

Results for each race can be found at http://www.pttiming.com and on the official website of Louisville athletics at http://www.gocards.com. 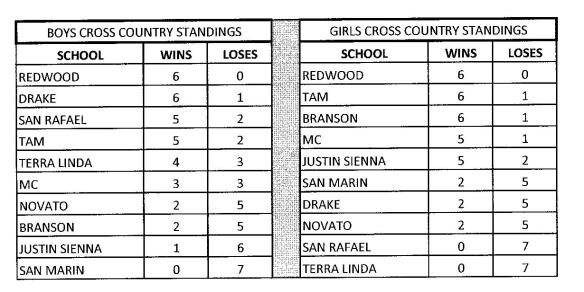 Photos of the Drake, Justin-Sienna, San Marin & Branson Meet can be found at the following links (Courtesy of Tom Benjamin):

Results of Novato and Terra Linda at Redwood:

Just a reminder that all of this week’s MCAL XC races are on Wednesday, October 7.

CAL’s John Lawson (Drake) placed 16th in the Mens Gold Race running 25:22 on the 8km course. John was CAL’s second runner and helped his team to place 3rd at the Roy Griak Invitational.

Stanford’s Julia Maxwell (Branson) ran a PR to place 20th in 20:20. Julia was Stanford’s 5th scoring runner and she helped the Cardinals to place 3rd at the Washington Invitational. The race was won by Aisling Cuffe of Stanford in 19:41.

Washington’s Fred Huxham (Redwood) placed 21st in 23:42. Fred was Washington’s 2nd man and helped his team to place 6th at the Washington Invitational. The race was won by Edward Cheserek of Oregon in 23:15.

Juliette Nast of Justin-Sienna leads in the early stages of the girls race. Grace Dailey of Branson would go on to win.

Elsewhere across the county: