Stanford’s Erik Olsen (Novato) won the Mens 8km College Race in 24:25 (4:55).In photo below that is Reesy Byers (Sac State) who competed for Santa Rosa HS.

The RanMarin Summer Training program was a success and a lot of fun..The athletes are now off to a great start iin their fall seasons and we wish them well.

Anna Harleen of Branson ran the first race of her senior season on Thursday. She ran a strong race to finish 2nd. Anna finished an impressive 2nd place at the CIF State Cross Country Championships last fall and is off to a great start to her racing season.

Sophia Noto of Drake has continued to show improvement and she started out her season with a bang by finishing 2nd at the Stinson Beach Relays. Sophia placed 5th at Ed Sias. On Thursday Sophia ran a well paced race to finish 3rd.

Aislinn Miller of Drake ran a great relay leg at Stinson to record the 11th best time. She placed 7th in the Frosh Soph race at Ed Sias. On Thursday Aislinn ran a solid race to finish 7th.

Chloe Hunwick of Drake has started out the season well with a 31st best time at the Stinson Beach Relays. Chloe then placed 15th at the Frosh Soph race at Ed Sias.

Banson Senior Sophie Breck ran a good relay leg at Stinson and had the 17th best time. Sophie continued to run well and finished 8th at the league meet at Bon Tempe.

Angela Seeger ran a solid leg for Branson at the Stinson Beach Relays and recorded the 23rd fastest time. At the league meet Angela ran a tough race to finish 16th.

Michele Bollinger of San Marin has returned to cross country and an injury in 2012. Michele led the San Marin team at Stinson and ran the 20th fastest time. Michele competed at the Viking Opener and finished 24th. At the league meet at O’Hair Park Michele placed 6th to lead her team. (Photo from IJ)

Michael Petruzelli of Branson  finished 25th at the league meet at Bon Tempe in his first league meet.

Jordan Allen of Marin Catholic had a solid summer of training and we can’t wait to see her out on the course soon. (Below is a photo from 2012 Clovis Invitational)

Zach Bibeault of TL and Julia Maxwell of Branson shown heading to the finish. 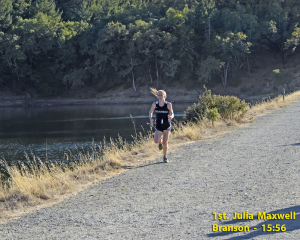 Branson, Redwood and San Rafael competed at the Ed Sias Invite today. Results can be found at:  http://www.prepcaltrack.com/ATHLETICS/XC/2013/sias.htm

Drake and Novato competed at the San Francisco Invitational hosted by Lowell. Results can be found at: http://www.rtspt.com/events/cif/lowellxc13/

The 50th Stinson Beach Relays were run today in honor of Tam’s Coach Kreig Vezie who was the fonder of the Relays and passed away recently.                  The top 5 finishers in each race will receive a Stinson Beach t-shirt.

UCLA’s Alec Govi (Marin Catholic) a cross country and track & field athlete is a recipient of a Pac-12 Postgraduate Scholarship for 2012-13. Alec will attend UCLA School of Law in the fall.

“Govi earned Pac-12 All-Academic honors twice during his career and was a Top 60 finisher at the 2011 Pac-12 Cross Country Championships. Govi earned the 2013 Athletic Director’s Academic Excellence Award for making the Director’s Honor Roll (3.0 or higher GPA) every quarter at UCLA, and he was also named to UCLA’s All-Academic Team for men’s track & field for the second time in his career”. UCLA Athletics

Clayton Hutchins (Drake) runs his way onto the Cal Poly Cross CountryTeam at the UCSB Lagoon Meet. Clayton was the first freshman in the 8km race finishing in 10th place. http://static.psbin.com/t/d/b0js5xeqxbryd4/2013_UCSB_Lagoon_Men.pdf

John Lawson (Drake) will not be competing for UCLA.

Erik Olson (Novato) helped the Stanford Mens team to win the USF Invitational by placing 5th in the 8km race.